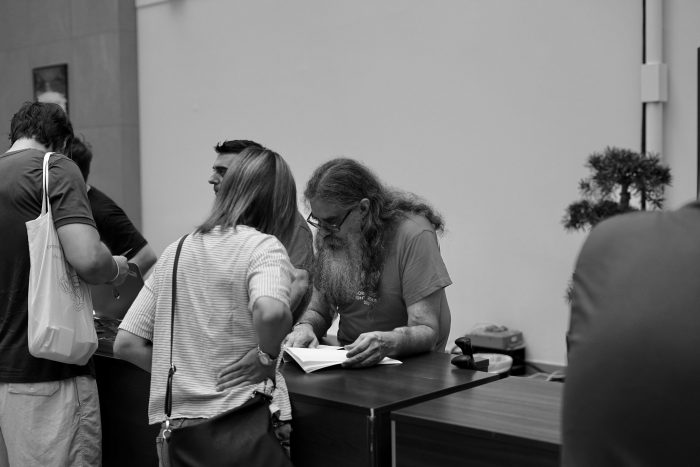 I can’t start this post without acknowledging the impressive work Yoast is doing inside the WordPress community. Maybe you know that they are the go-to reference in any SEO-related thing. But also they’re involved in the Five for the Future initiative, and they’re helping many people with their community funds (Yoast Diversity Fund and Yoast Care Fund). Yesterday they published the interview with my friend José Luis Losada, who has received their Care Fund after I told them about him. Please take a look at it and then come back here to learn a little more about him. This post is what I told them about José Luis and why I thought he deserved it.

I’m the organizer of the meetup of WordPress Pontevedra, a city in Galicia, in the northwest of Spain. I still remember when I met José Luis. An old man, with a long white beard and long white hair, with a hat, with two walking sticks to help him walk, came one hour early for our monthly meetup. ‘Hi, can I help you with something? If not, I will sit here and wait’. There wasn’t much to do, so we talked a lot (José Luis talks a lot, that hasn’t changed).

That was a bit more than two years ago. I think he fell in love quickly with the WordPress community and its core: helping other people, no matter their level, their skills, their background. He wasn’t a developer. He had lived in Galicia, in the Canary Islands, and many years in Venezuela. He had worked as many things in his life. In his family shoe company. Driving trucks. Fixing old computers. As an electrician. He was ill. He had surgeries. He was happy with his life, but he had a rough accident while working at a hotel. He couldn’t work anymore. He was retired. That was shocking for him, I’m sure.

He came back to Galicia, and he somehow wanted to help a cousin that needed help. With a website. With its SEO. He found that there were meetups. And then, he appeared in one. Since then, he started to help us. He helped the Galician community to grow from 1 meetup to 6 in the main cities of the region. Do you want to go to any of them? He’ll pick you up and drive you there. We encouraged him to go to a WordCamp. He went, as a volunteer, to help. He doesn’t care much about the talks. He only cares about the people. ‘Can I help you with something?’ is his motto.

I can’t do a chronology of the WordCamp he’s assisted, but I know he’s been in Santander, Bilbao, Irun, Zaragoza, Valencia, Madrid, Granada, Las Palmas de Gran Canaria, Sevilla… In some more than once. He’s been invited to sleep in other organizer’s houses, they’ve shown him their cities, had dinner with him, listen to his stories. He’s been in Portugal too, in last WordCamp Lisbon. He was a volunteer for the first time this year in WordCamp Europe, where we organized a trip from Galicia to be there for our first time. He started answering stuff in the WordPress official forums. He learns how to do things so he can solve other people’s problems.

We convince him to do a talk in our meetup about how to ask the right questions and give proper answers. As it was almost Christmas, he went with a Santa costume. And this September, finally, he’s giving his first WordCamp talk. In the Contributor Day, no big lights and flashes he doesn’t want. A conversation about how he’s taken advantage of the WordPress community. We’re waiting for it because we can’t imagine what he’s going to say. Because it’s been the Spanish WP community, the one that has taken advantage of his big (and a little grumpy) heart.

So, we know that he’s going to spend the Yoast Fund in petrol for his old car to go to more meetups to help. But any help we can give him, won’t be enough. He doesn’t want sponsorships because he wants always to be genuinely himself. Still, we’d love you to help him, and more of that, spread his story, so he gets the recognition he deserves. We’re proud of him.

Really, I could add as a reference every WordCamp organizer from Spain, and even from Portugal, and not only WC organizers, meetup organizers too. His devotion to the WordPress community and his effort to help in everything he can is incredible. He’s made friends all over the world, thanks to WordPress, and he’s gained a place in the heart of this large community. And he keeps doing it, not only in person but in the forums too. And helping us organizing WordCamp Pontevedra. And our meetups. And so many more stuff. Anything he can help with.

Since I wrote this, José Luis gave his fantastic talk during WordCamp Pontevedra’s Contributor Day (if you know Spanish, you can watch it here). This was the second edition of the event, and everything went smooth. Last year, when we were preparing the first edition (I was responsible for sponsorships), we were a bit worried about if we would get all the money we needed. We went to WordCamp Porto, and I had planned to talk with someone from the Yoast team about the possibility of them sponsoring us.

He quickly went to the first one he found with the Yoast t-shirt and tried to explain the situation. José Luis wanted to help! I would have killed him right there! He was talking to Alain Schlesser, a fantastic developer who was giving a talk there and went to the event sponsored by Yoast. He obviously didn’t know what was going on.

In the end, I explained to him during the after-party what happened. I also talked during the event with Marieke and Judith, and not only they sponsored our WordCamp but also gave us some discounts for our meetup. I hope they can repeat it in 2020!

Thanks again, Yoast, and thanks, Samah, for all your help with everything!