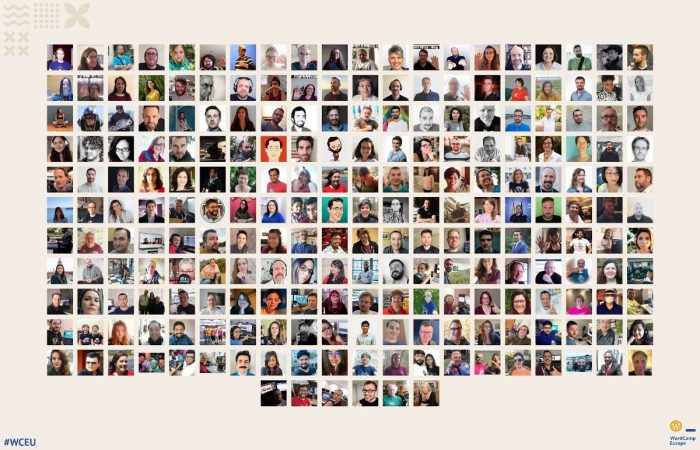 I should be asleep right now after coming back to my hotel room a few hours ago from the WordCamp Europe 2020 After Party in Porto (Portugal). It would have been an incredible week since Tuesday when I arrived, as part of the huge organization team, and I would have been totally exhausted and happy.

But, as everyone knows, the situation changed dramatically.

After months of work, the physical WordCamp Europe had to be canceled. Then, the team decided to try an online version of the event, which has been held from Thursday to Saturday. And as there is no hangover or tiredness, I can write these lines making my little summary of what happened.

WordCamp Europe is, in itself, a different event.

You know I’ve only been to one WCEU in my life last year in Berlin. And if normally WordCamps in Spain mark you in some way (the people, the city, the food, the contacts, the talks, the laughs…), last June’s event totally fascinated me. 3000 people from all over the world under the same roof learning, sharing, and having fun.

I was so excited that I signed up directly for the 2020 event, booked a hotel, and signed up to see if I would be selected as an organizer (which I was).

The family atmosphere is much more complex to achieve. Everyone has to “work” the WordCamp experience they want to live: forcing themselves to speak English with strangers when they put on a coffee; asking around the stands and talking to the creators of plugin we use every day; stopping a speaker and stealing twenty seconds from them because there are many other people who want to do the same…

Is it possible to bring this experience to the online world?

Contributing on the first day, here is indispensable.

WCEU Contributor Day is the first day of the event. In this case, it was held online on Thursday, from 3pm to 8pm. Before that, each team had shared a short video explaining what they were going to do during the day so we could decide where we wanted to help.

I was hesitant between the Themes team, the Training team (it’s spectacular the number of lessons they have already posted), and the Privacy team.

After talking to Garrett about my last post, I decided to participate in #core-privacy. And, as always, the day of the contributor allowed two fundamental things in this community:

I would highlight, besides the advice on how to collaborate with the team, the talk between Carike, Garrett, and Jono Alderson (from Yoast) about “informed consent” in the world of marketing, in which we were digressing about what it means and the challenges it implies. The conclusion: scare better than teaching, because fear creates the real movement…

I will probably be involved with this team again because even though I am not a legal expert (nor an expert developer), these are topics that interest me a lot, and it is enriching to receive as many points of view as possible.

The WCEU talks and movement

As in all WordCamps, the first thing to do is congratulate the entire organizing team, who has given their lives and time to make the event work from start to finish without failure. S-pec-ta-cu-lar.

As in the WCES, there were two tracks of talks at the same time, both with simultaneous transcription and some movement in the YouTube chat as a meeting of people at the door of the room when entering, and when asking questions after the presentations.

Also, there were several Zoom rooms for the sponsors – which I didn’t end up entering – and a couple of networking rooms to keep asking the speakers after their talk – which I did enter a couple of times.

Honestly… it was short!

As I said before, the experience of a WordCamp Europe (and of any in general) depends a lot on how you “work” it personally.

I’m sure there will be people who simply logged in for a while to watch a particular talk and would find it just like a webinar. I know that others were up late at night in different Zoom rooms, meeting and talking with people from many countries about all kinds of topics (or so say Nilo and Yesares, the experts).

It is not the same to live it from inside, organizing (or presenting, as I did in the WCES) than totally from outside. So my opinion is very personal about what I lived and what I did, that’s for sure.

I liked that everything was punctual and on time, I liked the easiness we were given to talk with speakers in the Zoom rooms after the talks, and I liked to see very well known members of the community worldwide participating in the YouTube chat.

I liked less those fifteen-minute gaps between talks that made you lose track of what you were doing. I understand that there were many parallel things with sponsors, networking, etc. However, I think an event like this has to be like television. Hooking you up from start to finish, with no time to go to the bathroom (and if you go, make it quick because you’re missing something).

I understand that the technical team needs to have their backs covered in case of a problem, but that’s where the difference between a “professional” event and a community event is most noticeable. Maybe it’s out of pure unconsciousness, but at WC Spain, there wasn’t a second to breathe, and that made the chat more alive, Twitter didn’t stop for a second and it was more challenging to disconnect from WordCamp.

And the truth is, this is the only thing “that I would change.” And I’m sure there will be many people who think the opposite of me. That’s the beauty of it. And as part of organizing teams, I have learned that it is 100% impossible to please everyone.

So the only thing left for me to do is to give my CONGRATULATIONS again to the people who have been organizing this event for months, to the volunteers, to the speakers, and to the sponsors, and hope that it will be the last online event we will be forced to do in this situation.

Hopefully, in June next year, everything will be “normal” again, and we will be able to enjoy another incredible WordCamp Europe in Porto. And that the Sunday after that I will be sleeping, and not writing, which is better… or not!